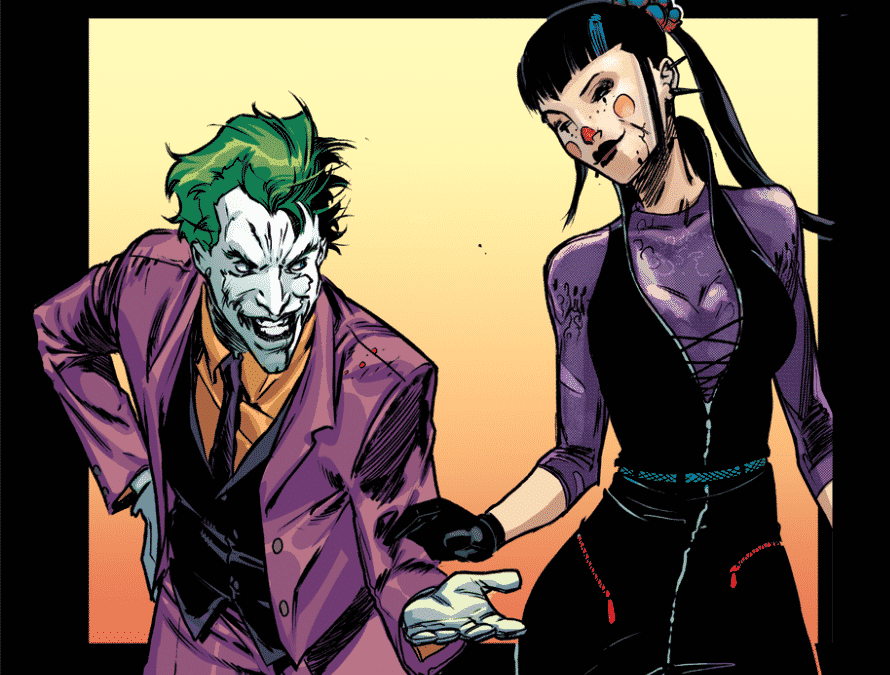 Joker’s New Girlfriend Punchline is the opposite of Harley Quinn. For almost three decades now, Harley Quinn has remained the most popular sidekick turned supervillain characters of all time, until Punchline!

Tom King’s DC Comics Batman run was a very divisive title, with a lot of longtime fans losing interest in the Dark Knight’s adventures during King’s time in the book, but new writer James Tynion IV has gathered a lot of goodwill due to the quality of the first issues of his run in the main Batman book and the character that debuted in Batman #89, which he co-created along with Spanish artist Jorge Jimenez, Punchline, can be quite important in the upcoming storyline, Joker War.

For the vast majority of new readers, Punchline is known right now as simply the Joker’s new girlfriend, but there is more to the character than just that, much like it was during Harley Quinn’s early days in the Batman Animated Series in the 90s.

Tynion had a pretty clear notion with the first issues of his Batman run: get Bruce Wayne to mourn the loss of Alfred in the City of Bane storyline in a more honest manner and get the Dark Knight back to his action-fueled best, which is why he brought his biggest nemesis, the Joker, in a storyline called Joker War where the Clown Prince of Crime is finally decided to take Batman’s life and he has gathered his own group of people to do so.

There are rumors that Tynion’s run is only going to be a transition for the much-rumored 5G event, which is supposed to be a line-wide reboot or just a set of massive changes in the DC books, but regardless of that, the writer seems to be fully determined to get the most out of what is widely considered his biggest gig in the industry so far and he’s throwing everything at the kitchen sink with his Batman run. 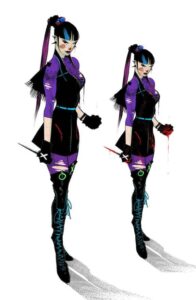 Enter Punchline, a character that is designed to be the Joker’s new girlfriend and partner in crime. And while we are yet to see her in full action, the character is already being an interesting commercial success for DC comics, considering that the issues she is bound to appear in, Batman #89 and Year of the Villain: Hell Arisen #3, are already sold out and they had to do a second print in order to sell more to the readers.

There are very valid reasons to understand why the Joker’s new girlfriend would be such a hit even without reading the first page she is in: the character of the Joker is enjoying a lot of massive success in the last 10 years and the recent Joaquin Phoenix-led film has pushed the character even deeper in the public’s consciousness, with a lot more people interested in his character and what he brings to the table. Add to that the excitement that Tynion’s run is creating among readers and the fact that Batman was already a top selling book, so we are talking about a perfect storm of success for this new character.

There is also a precedent with the character of Harley Quinn, who has been a major success since her appearance in the aforementioned Batman Animated Series as the Joker’s sidekick and that degree of success has been translated to comics, movies and video games. But considering that Harley broke away from her abusive relationship with the Clown Prince of Crime, there was a place for a new character in that role and that seems to be the case with Punchline.

DC’s Punchline Is Not Harley Quinn But Is She Only Joker’s Girlfriend? 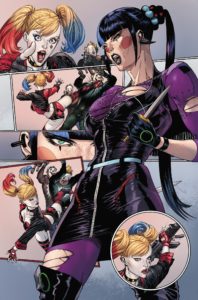 dynamics as the Joker’s new girlfriend. While Harley was a very humorous and upbeat character, Punchline seems a lot more reserved and analytical, which can be a very fascinating contrast to the Joker’s maniacal behavior. And the character of Punchline is already appealing to some fans, which Jorge Jimenez proved by sharing a cosplay on Instagram.

And while the upcoming Batman issues are where most people are expecting to see Punchline in action, we cannot lose our sights of the upcoming Year of the Villain: Hell Arisen issue #3, where Apex Lex Luthor is looking for people in the DC Universe that have a similar way of thinking to the distorted version of the Dark Knight in the Dark Multiverse, the Batman Who Laughs. Lex finally decides to reach the Joker and this is where we are going to get to see more of Punchline in the upcoming comic book storylines of the DC Universe.

Quotes From The Creators About Joker’s New Girlfriend Punchline

Jorge Jimenez has been very excited to promote his new character to the media and he has been very clear that Punchline is not going to be just a Harley Quinn ripoff or a female Joker as Punchline (Joker’s new girlfriend) will be her own person.

“When she smiles, it’s scary. It’s not a toothy smile, it’s a closed mouth grin,” Jimenez stated. “She is a sadist. She enjoys killing people. She is talented at killing people. The Joker calls her the funniest person he’s ever met in his life. She is a physical character, and she should be sexy. Sexy in a slinkier, darker way than Harley, who is all pep and energy.”

“Sometimes at DC or any big creative corporation, when you want to throw a new idea in the mix, they want to kick the tires and test it out,” Tynion said in an interview. “Thankfully, with Punchline, there was an immediate energy to the idea and everyone got behind her really quickly, so we were able to move really fast. It helps that I was writing all the books, so I could just stick her in wherever I wanted.”

Punchline Is Making Headlines And DC Loves It

It’s very clear that Punchline is getting headlines in the current comic book industry and that’s very good news when we consider that DC has been struggling with creating new characters, with Superman’s son, Jonathan Kent, being the last original creation that was a hot topic among the public and he dates back to 2016. Some might argue that the Batman Who Laughs is another character, but he is a sort of mix of Joker and Batman and has yet to reach the masses.

Regardless, we can’t wait to read about Punchline and her mischievous deeds in the upcoming Batman and Hell Arisen issues! Check out Punchline’s first cover appearance on Batman #92 with cover art by Artgerm, below! 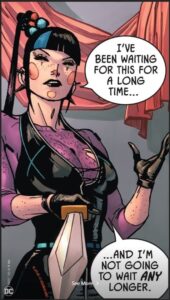 DC launched a prelude to Batman #92. It did so with 10 panels of original story, announcing that this would be the first of a three-part preview leading up to the book’s release on June 10. The panels show Punchline voicing distaste for Harley Quinn’s stuff in an old safe house.

The 10-panels are from the very same creative team slated to deliver Batman #92, with that being writer James Tynion IV, artist Guillem March, colorist Tomeu Morey, and letterer Clayton Cowles.

Tynion announced the project via Twitter:
Hey! While on break, I cooked up a handful of prelude stories with @GuillemMarch to give you a taste of Gotham while you’re waiting for Batman to return next month. They’ll be on DC’s Instagram, in their stories. The first of them is up now, featuring Punchline!

This new content is original and unique to Instagram, rather than simply culled from an upcoming issue. The story is designed to tease what is to come in Batman 92 rather than to spoil it.

In effect, DC has dealt fans who have been waiting a longer-than-usual amount a time an appetizer for the next issue of its flagship Batman title. Due to the COVID-19 crisis, the most recent new issue of Batman was released on March 18, meaning nearly three months will have passed between issues of a book that usually hits stores every other week. 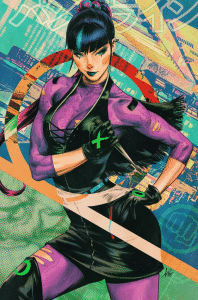 Punchline: DC to Explore the Origin of Joker’s New Sidekick in Oversized One-Shot This November

From her first appearance in the pages of Batman #89 to her spotlight story in The Joker 80th Anniversary 100-Page Super Spectacular, Punchline has quickly established herself as one of 2020’s breakout comic book characters. On November 10, the mystery behind this new character is explored further in Punchline #1, a special oversized (48-Page) one-shot.

“Back when I first introduced Punchline, I said many times that this wasn’t going to be a flash in the pan character. That I had big plans for her moving forward, that would drive big story next year and beyond,” says Tynion IV. “Joker War is over, but Punchline’s plans have only just begun. I’m thrilled to be telling this frightening story that expands her past, and sets up her future, with the amazing Sam Johns, and the incredible Mirka Andolfo. This is only the beginning!”

Facing the consequences of her role in “The Joker War,” Punchline is the story of Alexis Kaye, and how she’ll take Leslie Thompkins, Harper Row and Cullen Row on a harrowing journey that reveals her radicalization to The Joker’s ideology.

“Fans immediately responded to Punchline,” says Johns, “so I’m thrilled to be part of the team that gets to build the foundation of this deadly cult icon. Working with such a talented artist as Mirka means we didn’t have to hold back on any of the action, horror, or romance…And when it comes to Punchline and Joker, you often need to pull off all three at once!”

Subscribe to Comic Book Subscription Box for an Awesome surprise every month!